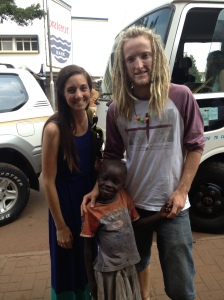 The people in the photo are two team members, Kelsey and Thomas, from California and Australia. And the third person is a little girl we found in the street today, and we don’t know her name.

Today was Sunday and it’s typically a day “off,” which means we don’t have any official work scheduled. But when you’re in Uganda trying to help people in extreme poverty, you’re never really off because there always seems to be someone who needs your help. We were driving our big purple bus through town on our way to lunch, and we were just commenting on how in some areas of town you’ll find “street kids.” Those kids might not have parents, so they’re just begging in the streets to survive. Or, the kids may have at least one parent at home, but they’ve been sent out to the streets to beg as a way to help support the family. Either way, we were having a conversation about how sometimes you may run across kids begging in the streets.

And then, when we stopped our bus to let our team out at a really great pizza place for lunch, we found the little girl in the photo above. Actually she kind of found us; she was   in the way while our 27-member team was crossing a busy street, and she was holding her hand out.

Most of our team saw her, and most said hello or patted on her on the shoulder. It’s just what we do – if we see a kid in need, we feel compassion and want to at least let the child know she’s been seen. Most children are ignored here. Then we all got across the street and started getting a table for 27 set up outside the pizza place.

The photo I didn’t get, but wished I had, was of one of our team leaders, Ken. As we were moving small tables around into one long table and moving chairs, I looked and saw Ken standing on the sidewalk with an angry look on his face, holding the little girl’s hand. And it was obvious at that moment what was going to happen – that little girl begging in the street was going to eat pizza today.

**Another good photo, which I didn’t get, was of Ken yelling at the security guard who was trying to chase the little girl away. You’ll have to use your imagination for that one.

So I don’t know her name, or what her living situation is, or whether or not she has a mom or dad. But I do know that a day off for us is never really a day off when there’s a little girl begging for food.

There are too many little girls like that in Kampala, begging for food. And there’s no way we’re going to see all of them. But today at least one little girl ate pizza. And tomorrow morning we “officially” go back to our work.