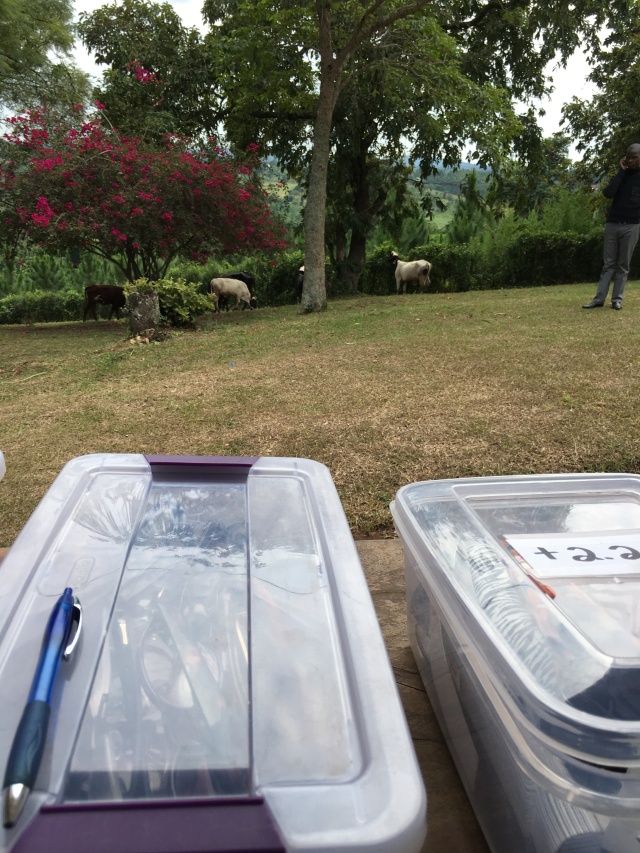 Today in Uganda (July 4, 2017) we held another medical clinic, this time at a small village church about 45 minutes from where we’re staying. As usual, I worked in optometry – which means, I gave reading glasses to people.

For some reason, on these teams people associate me with reading glasses, and that’s actually my favorite thing to do in our medical clinics. I’ve worked in the pharmacy department before, but the pace is too fast for me. And I’ve worked in crowd control, trying to keep people moving into the right areas, but I think the Ugandans have figured out by now that I’m just not all that intimidating. I could try working in vitals I guess, but that seems kind of important (i.e., “vital”) and therefore scary. I’ve done de-worming, which is about as attractive as it sounds (HA – actually it’s not that bad). Anyway, I’m usually in reading glasses, hanging out with mostly older Ugandan women. Not a bad way to spend a day.

Today there were two new Loving One by One team members working with me; first-timers if you will. Of course they were rock stars at the glasses thing – one, because they’re both amazing people, and two, it’s not that complicated. That’s why I do it all the time. New team people are fun because they ask a lot of questions, similar to the questions I had when I first came to Uganda in 2011. One of the questions today had to do with a 15-year-old girl, who happened to also be a mother with her baby – “Do a lot of 15-year-old girls here have babies?” Unfortunately, the answer is yes.

Teenage girls in Uganda are in a really hard position. Chances are they’re not in school, or if they’re in school for any length of time, chances are they won’t finish school because the families probably won’t be able to pay for it. Which makes them more susceptible to making choices to become sexually active very early. Of course, rape is fairly rampant throughout Uganda as well. So – yes, a lot of 15-year-old girls have babies.

Hang with me here. I’m trying to tie all this together. So why would a teenage mom want reading glasses? My guess would be another optical problem – probably nearsightedness, which comes at any age; it came to me around 12 years old. I’m sure kids in Uganda need glasses for the same reasons kids in America need them. So maybe this teenage mom just needed normal glasses, which unfortunately we’re not equipped to prescribe and provide.

I’ve gotten used to so many quirky things here – including people under 40 asking for reading glasses – that I don’t think about it that much anymore. But for some reason, this girl wanting glasses was hard to let go of. I think it’s because more than anything, this girl has had a really hard time, and sees nothing but hard times ahead for many years, and she just wanted a break of some kind.

I hope she somehow finds a way to get real glasses, if that’s what she needs. More than that, I hope she finds a way to be the best mom ever in Uganda, and through the help of our organization and others, to turn things around for herself and her baby.

Sorry this blog post has been a little heavier than most of them. However, please enjoy this photo of some of our reading glasses, with cows in the background, who also aren’t allowed to have them if they’re under 40.